Gilbert was riding and driving Canadian Horses at a young age.

This year marks the 350th anniversary of the arrival of the ancestors of the Canadian Horse in what is now Canada. Horses sent to the French colony by King Louis XIV eventually became the distinct breed we know as the Canadian Horse. Gilbert’s experiences with the breed, sometimes called Le Petit Cheval de Fer, or Little Iron Horse, goes back to his childhood on a farm in Matapedia, Quebec. In that part of Quebec, life on the farm was much the same as it had been in the early years of the twentieth century, especially for Gilbert’s mother, Monique, who had been left a widow with six children when Gilbert was only three years old.

From a very early age, Gilbert loved working with harness.

Gilbert loved working with harness from a very early age, an attraction that would stand him in good stead when working with Canadians. As soon as Gilbert was able, he would harness the farm’s horse to do much of work done today with tractors, ATVs and snowmobiles. One of the most hardworking farm horses he remembers from those days was a little Canadian (unregistered, of course, since papers were of no value to a farmer at that time) named P’tit. Gilbert and P’tit would haul water from the creek for his mother’s big garden, bring hay in from the field, and the many varied chores required on a largely self-sufficient homestead.

Gilbert and P’tit with a young work crew hauling hay.

Gilbert’s first horse was a Canadian cross mare. Since they had no trailer, he had to ride her home to the farm, a distance of several miles, and although she wasn’t well broke when he picked her up, she was doing much better by the time they reached home. Because she was a red roan, he called her Rosie, and she was put to work logging and hauling, as well as being his saddle horse.

When he got older, Gilbert went to live with his brother, Albert, who had a riding stable in Joliette, Quebec, and was head wrangler for his brother’s string of about 40 horses. Every spring, Gilbert would make sure both new and old riding horses were schooled enough for their clients of varying skill levels to ride. Many of their string horses were Canadians, because they were inexpensive and easy to find in Quebec. Around the same time, Gilbert was competing in various rodeo events, from bronc riding to barrel racing. One of the best barrel racers he rode was a Canadian stallion belonging to a friend.

Fast forward to 2001. Gilbert had moved west to BC in 1980, spent some time working with thoroughbreds in Osoyoos and Maple Ridge, bred, raised and trained Quarter Horses for many years, and now worked as a farrier and horse trainer in Langley. He lived at the ranch of Jim McCrae, founder of the Back Country Horsemen of BC and a diehard mule man. Gilbert used to help him take clients and gear to his camp on Snass Mountain, and worked with his mules. Jim was giving a Stock Management clinic to a group of Back Country Horsemen members and Gilbert was helping out.

One of the students at the clinic was Ruth Donald, a rather inexperienced horse owner who owned a young Canadian mare. Gilbert was saddling up Jim’s mule for Ruth and they got to talking. When she realized that not only was Gilbert a skilled horse trainer, but that he was from Quebec and familiar with the Canadian Horse breed, she asked him if he would work with her mare. He rode the young mare in her first Canadian Horse breed show in 2002, just after the Canadian was declared Canada’s National Horse.

Gilbert was one of the founding members of the Canadian Horse Heritage & Preservation Society  (CHHAPS) in the fall of 2002, and went on to show Gina in a number of CHHAPS shows. The CHHAPS shows included various events that showcased the versatility of the breed, from performance and in hand classes to driving and pulling. The Little Iron Horse Competition required a horse to compete in a Trail Class, a reinsmanship (driving) class, a timed 1/4 mile trot under harness, and a stone boat pull. In 2003 at the Historic O’Keefe Ranch in Vernon, B.C., Gilbert and Gina won the Little Iron Horse competition. By that time, Gilbert had adopted both Gina and her owner as family.

Gilbert and Gina competing in the stoneboat pull at O’Keefe Ranch.

Gilbert also taught Ruth’s Canadian mare to work cows, and competed in the weekly cattle penning competitions in Aldergrove with her. He even used her to demonstrate cattle penning skills at the Cowplay clinics he was giving at Twin Creeks Ranch in Aldergrove at that time.

Since then, Gilbert has also worked with Canadian Horses belonging to other members of the Canadian Horse Heritage & Preservation Society, mainly to get them started under saddle or harness, although he used another Canadian mare, Nisa, as his “demo” horse during his Cowplay clinic in 2013.  His help with little Pistachio was in a previous post, as was his participation in the Northwest Horse Fair in Albany, Oregon, with John Hartley’s stallion, Kurt. 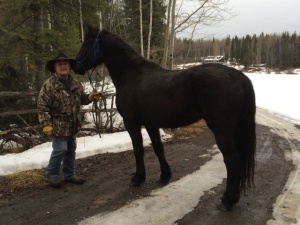 Now in 2015, Gilbert is once again getting a young Canadian mare ready to be ridden in her new home. Ylacey, a sweet mare belonging to Hayley Bouzek of Langley, is at Proud Horse Ranch learning how to be a calm and accepting riding horse, and Gilbert is looking forward to watching Hayley get to know her in the near future.

Here are more photos of Gilbert working with Canadian Horses.

Jumping Gina for the first time at O’Keefe Ranch

Driving Gina in the snow

Gilbert and Kurt warming up before the North West Horse Fair demo in Albany, Oregon.

Dressed up for a National Geographic special on the Conquistadors.

Gilbert and P’tit at the farm in Matapedia

Competing in a trail class with Sarah Lindsay’s Koko.

One of the first rides on Sarah Lindsay’s Soleil.

Harrowing the arena with Gina in harness.

The Canadian Horse has survived in North America since 1665, but it is still a breed at risk. View this Canadian Horse Heritage & Preservation Society article for more information, and if you love the breed, spread the word and encourage others to support this wonderful heritage breed.