In April 2012, Gilbert decided it was high time to return to his home province of Quebec to visit with family.  He flew in to Pierre Trudeau Airport (formerly Dorval) on the “red eye” from YVR, and was met by his older brother, Albert Roy, a well known horseman with a ranch in St. Jean de Matha, Quebec, north of Joliette.  Once there, Gilbert was caught up in a whirlwind of activity related to Albert’s business of boarding, training, selling horses and running a tack shop.  Albert is known for his involvement with the RTPQI (Regroupement Team Penning Quebec International) and was on a team that finished 5th in the world championships in Germany.  (There’s a photo of Gilbert on the “bienvenue” page of Albert’s website – can you find him?) 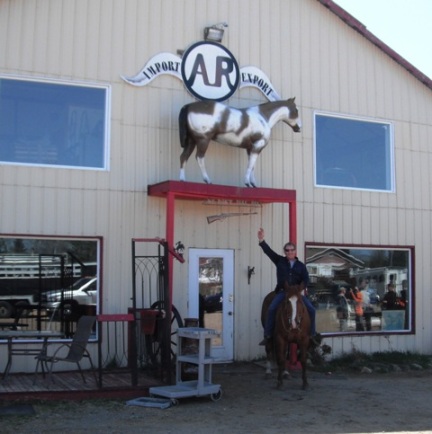 Albert Roy’s shop in St. Jean de Matha. He has his own line of Western saddles under the AR brand

Soon after his arrival, Gilbert’s “healing hands” were put to the test when he worked on two of the horses in his brother’s barn.  One was a trail horse who had started kicking out when asked to go forward and didn’t want his face touched.  Gilbert understood that it was a pain issue and went to work massaging the horse.  The owner, a chiropractor for humans, told Gilbert, “Merci Gilbert pour le temps que tu as pris pour m’enseigner à relaxer l’esprit et le corps de mon ami-cheval Vegas.”  (Roughly translated: Thank you for taking the time to teach me how to relax the spirit and body of my friend, Vegas.)   The other horse was a reining horse belonging to Gilbert’s sister in law, Debra Roy, who is a top level “coach for coaches” certified by the FEQ.  Her horse was high-headed, worried and wouldn’t let anyone touch his head, so he was very difficult to bridle, let alone ride.  After two hours with Gilbert, Chunky Monkey was so much improved that Deb said the change in her horse was like night and day. 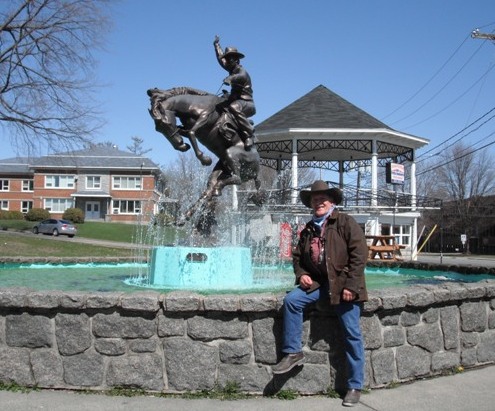 It’s an attractive town, with many interesting old fashioned buildings.  One of the things St. Tite is famous for, is that it’s home to the internationally known Boulet cowboy boots. 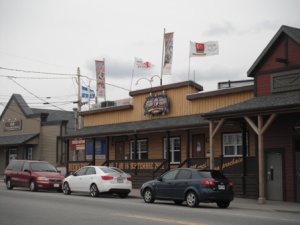 Back at St. Jean de Matha, Gilbert enjoyed some shopping at the store run by Albert’s daughter Natalee, and watching some of the boarders at Albert’s barn, including a young girl who had trained her pony to lie down and play dead, among other great tricks.  Sadly, it was indoors and most of the photos didn’t turn out very well.  If it had turned out, one of the best shots would have been the pony giving her a “high five” as he lay on his back and she straddled his belly. 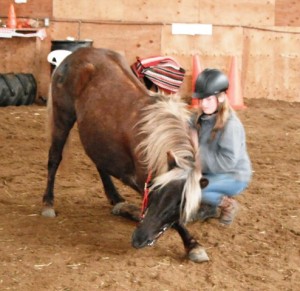 Then Gilbert, Albert and Natalee drove all the way to Matapedia on the Gaspe peninsula to visit their mother, who was recovering from a stroke.  They had a great visit at the old farm where they had lived as children, although it had changed a great deal since they lived there during the 60’s.  Some of the old horse drawn farm equipment that Gilbert had learned to use as a child is still there on display. 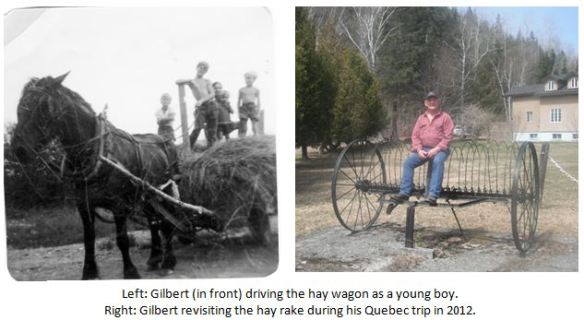 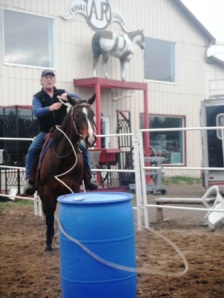 Back at Albert’s ranch, it was time to prepare for an auction.  When Gilbert was in his early teens and even smaller than a jockey, he used to make a few dollars riding horses for people who wanted them to look good at the weekly auction.  He was such a good rider he could make almost any horse look good, and the auctioneer could point out that even a child could ride the horse.  Now Albert decided to challenge Gilbert to ride one of the horses he wanted to sell   The young Quarter Horse mare had never seen a rope, but Albert challenged Gilbert to do a roping demonstration on her at the auction. 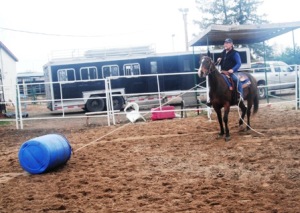 Gilbert worked horseback with Royale, the mare, for a few hours, getting her used to having the rope whirl around her head, then used to him throwing the rope and catching things from her back, and finally to dragging odd things, including a plastic barrel, around the arena.  Next day at the auction, watching Gilbert warming up the little mare outside, a woman made a good offer on her before the auction even started.  Gilbert went on with the demonstration, however, in order to publicize Albert’s own upcoming auction, and had the crowd whistling and stamping their feet as they enjoyed his cowboy roping demo.  Albert could have sold the little mare four times over!  He was so pleased that he’s planning to fly Gilbert out to prepare horses for his own annual auction next spring.

All too soon it was time for Gilbert’s return flight home.  He had enjoyed visiting his family and was not only proud of his brother Albert and what he’s accomplished as a horseman in Quebec, but also of his niece Natalee Roy, who is now the fourth generation of Roys to be successful horsemen, or in Natalee’s case, a horsewoman! 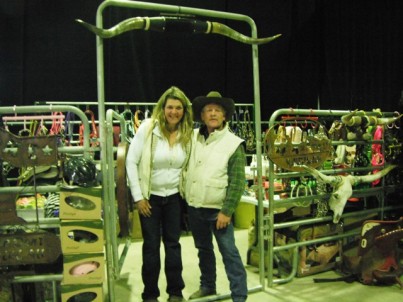 Gilbert and his niece Natalee in front of the AR booth at the horse fair.

There’s an interesting thing about Gilbert and his older brother Albert, who was almost like a father to Gilbert since their dad, Valmont Roy, died in a tragic accident when Gilbert was only 3 years old.  Unbeknownst to each other, they both got Jack Russell terriers a few years back.  Gilbert’s little JR, Snickers, used to ride Rambler, the farm’s palomino gelding.  Albert’s little JR, Cowboy, has a full vote at family meetings when they’re gathered around the dining table.  He sits on a chair with his paws on the table, and if anyone says “let’s vote”, he raises one little paw!

Albert’s Cowboy on the left, Gilbert’s Snickers on the right

All in all, Gilbert says he’s proud to be a trans Canada cowboy! 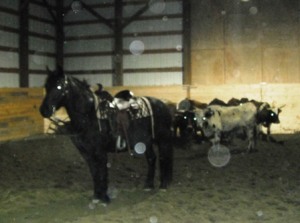 Back in October of 2011, at the time of the Mane Event in Chilliwack and the CHHAPS(Canadian Horse Heritage & Preservation Society) AGM, CHHAPS chair Ken Morris stayed a night or two at Tickety Boo Farm.  Ken’s one of our favorite people, and the former owner of Naro Haras Nisa, a little Canadian mare that Gilbert is training to work cows.  Ken and Gilbert got to talking about the Northwest Horse Fair in Albany, Oregon, and they decided it would be a great idea to have Gilbert travel to Oregon for the Fair in March of 2012 and participate in the Canadian Horse demo.  The plan evolved to where Gilbert would be riding John Hartley’s Canadian stallion Ranch Samaguy Dream-Boy Kurt in the demo. 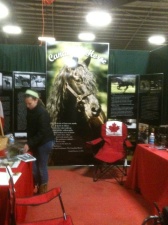 Part of the plan was also for Ruth and Gilbert to transport the beautiful display panels for the Canadian Horse booth.  The panels were donated to CHHAPS in 2011 by Kim Reid, who had them made about 10 years previously for the now defunct BC Canadian Horse District.  So Ruth and Gilbert rented a truck and camper large enough to transport the 4’x8′ panel, and to serve as their home away from home while in Oregon.  Having been in Oregon for the NW Horse Fair back in 2004 when Nisa was a yearling and enjoying some lovely warm days, they fully expected spring to be well under way in Oregon. 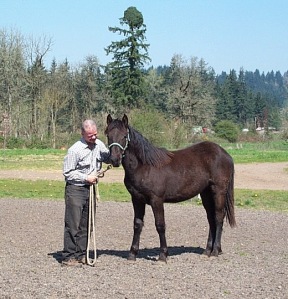 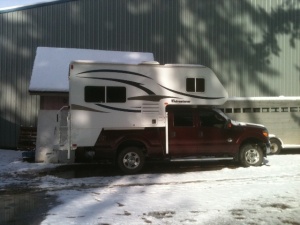 Snow and puddles in Oregon

Surprise!  Much of the drive through Washington and Oregon was in pouring rain, which didn’t let up after they reached Albany.  They arrived two days before the Fair so that Gilbert and Kurt would have a chance to get to know each other before the demo.  They parked their camper under a big tree at the barn where Kurt’s trainer, Kristina Eckert, had been working him.  By morning the camper was being bombarded by clumps of wet snow falling from the branches.  Yes, it snowed overnight!  This was not something they had come prepared for.  Cowboy boots and sneakers do not do well in two inches of slush.  Gilbert seemed oblivious to the weather, however, as he put a couple of rides on Kurt and got him used to rope work. 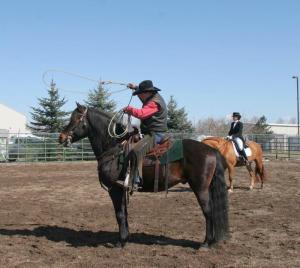 Gilbert and Kurt warming up before the demo. Photo courtesy Mandi Chestler

By the start of the Fair, which ran from Friday to Sunday, the weather had improved somewhat, but it was still slushy during the setup on Thursday afternoon.  The Oregon crew of CHHAPS members and Northwest Cavalry Association members did a great job putting up the display and other decorations in the horse barn.  Fortunately thanks to JR and KC Robinson (long story), there was a space for the camper on the fairgrounds.  Thursday night Kristina Eckert competed in the Breed Challenge, riding John Hartley’s mare Berthiaume Kurt Praline to successfully advance to the finals, while Gilbert and Kurt competed on Friday against stiff competition. 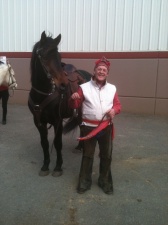 Gilbert and Kurt after the breed demo. Gilbert is wearing a Habitant sash and toque.

The CHHAPS demo began with two Canadians being ridden in historical costumes by Ken Morris and Terri Papineau, followed by a dressage pas de deux by trainer Bernadine Diers and student Natalie Pond riding two chestnut Canadians owned by Mandi Chestler, Ken on his mare Priceless and Michelle Heffner on her gelding Jeff, then French Canadian cowboy Gilbert riding Kurt and Kristina Eckert riding Praline in an English saddle and taking her over jumps.  Here’s a video from Saturday.

Over the three days of the fair, in addition to the daily Canadian Horse breed demo, Canadian Horses took part in the Northwest Cavalry demo in the big arena.  This was a real crowd pleaser, featuring swordplay and gunfire, and telling the exciting but tragic story of the horses in the U.S. Civil War.  Unfortunately, Gilbert had no Civil War uniform, but he was recruited to help with setup and safety during the cavalry demo.  Without the uniform, it was hard to tell whether he was a Union soldier in the 10th New York, although, given his Acadian roots, he could just as easily have been a Confederate from Louisiana.  Ruth made a video to share with the world. 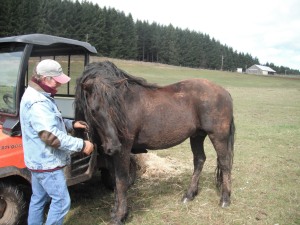 Gilbert and one of the Storybook stallions

After a very successful Northwest Horse Fair, Gilbert and Ruth headed to Yoncalla, Oregon to visit John Hartley’s Storybook Horse Farm.  It’s the largest Canadian Horse breeding farm in the United States.  John and his fiancé, Alexis, were very gracious hosts.  The weather had improved enough to allow a Kubota tour of the ranch, visiting the various bands of horses, including the cheeky yearlings, gorgeous stallions, and of course, the mares.  One had a little filly, Zoe, by her side, and they hoped that another one of the mares would foal during the visit, but she held on until several days after their departure.  The Kubota eventually got stuck in the mud with Gilbert and John aboard, thanks to weeks of unrelenting rain, and so did the John Deere sent to unstick it, but a helpful neighbor showed up with a come-along and everyone was back to the house in time for dinner. 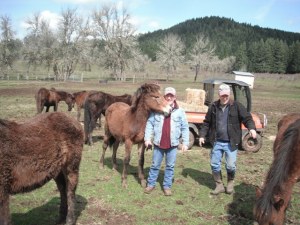 Gilbert and John horsing around with the yearlings at Storybook Farm

The trip home was uneventful, and 2012’s trip to Oregon is now a fond memory.   Gilbert and Ruth made some great new friends, both Union and Confederate soldiers as well as fellow Canadian Horse enthusiasts, and had a wonderful time.